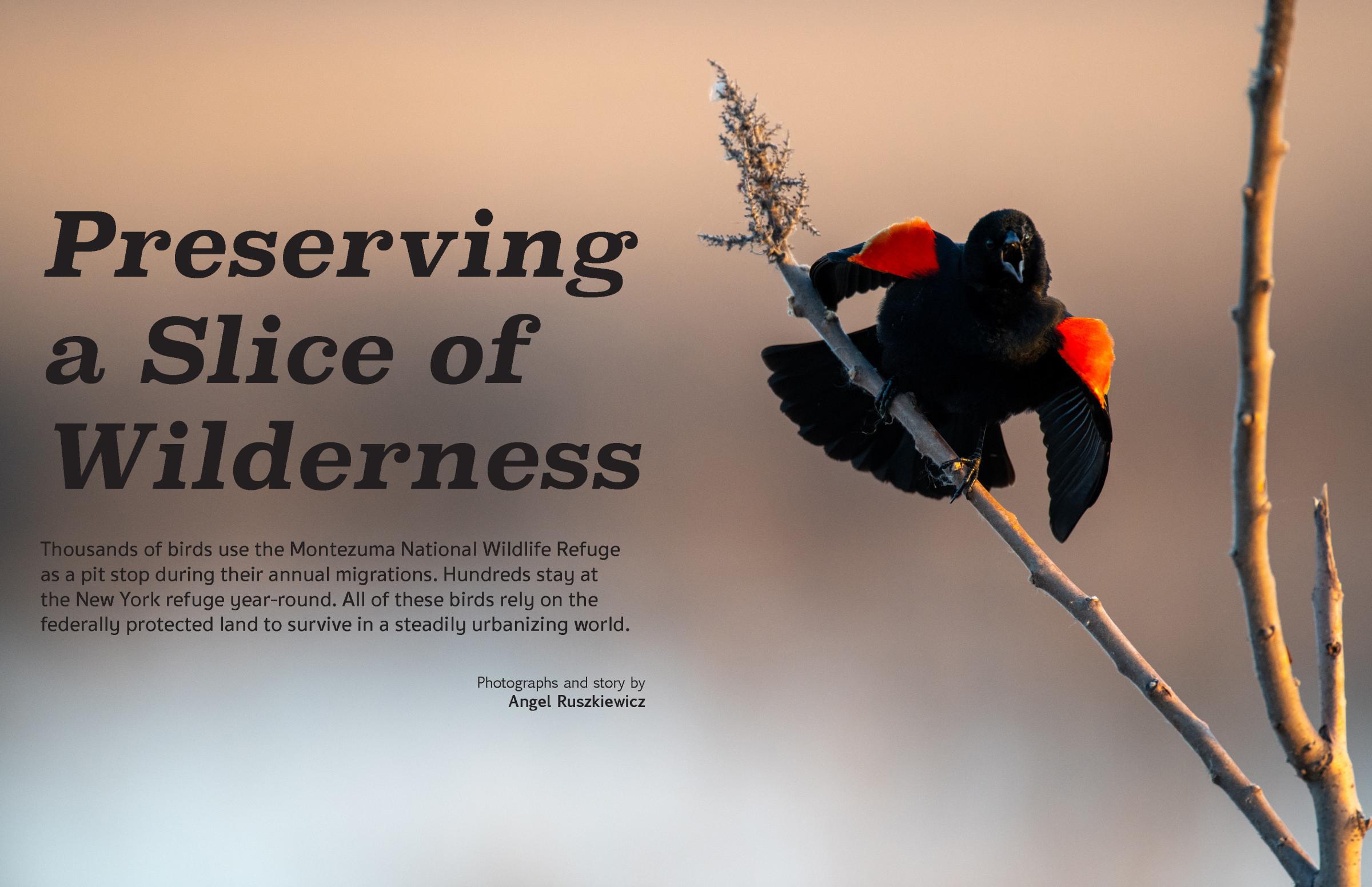 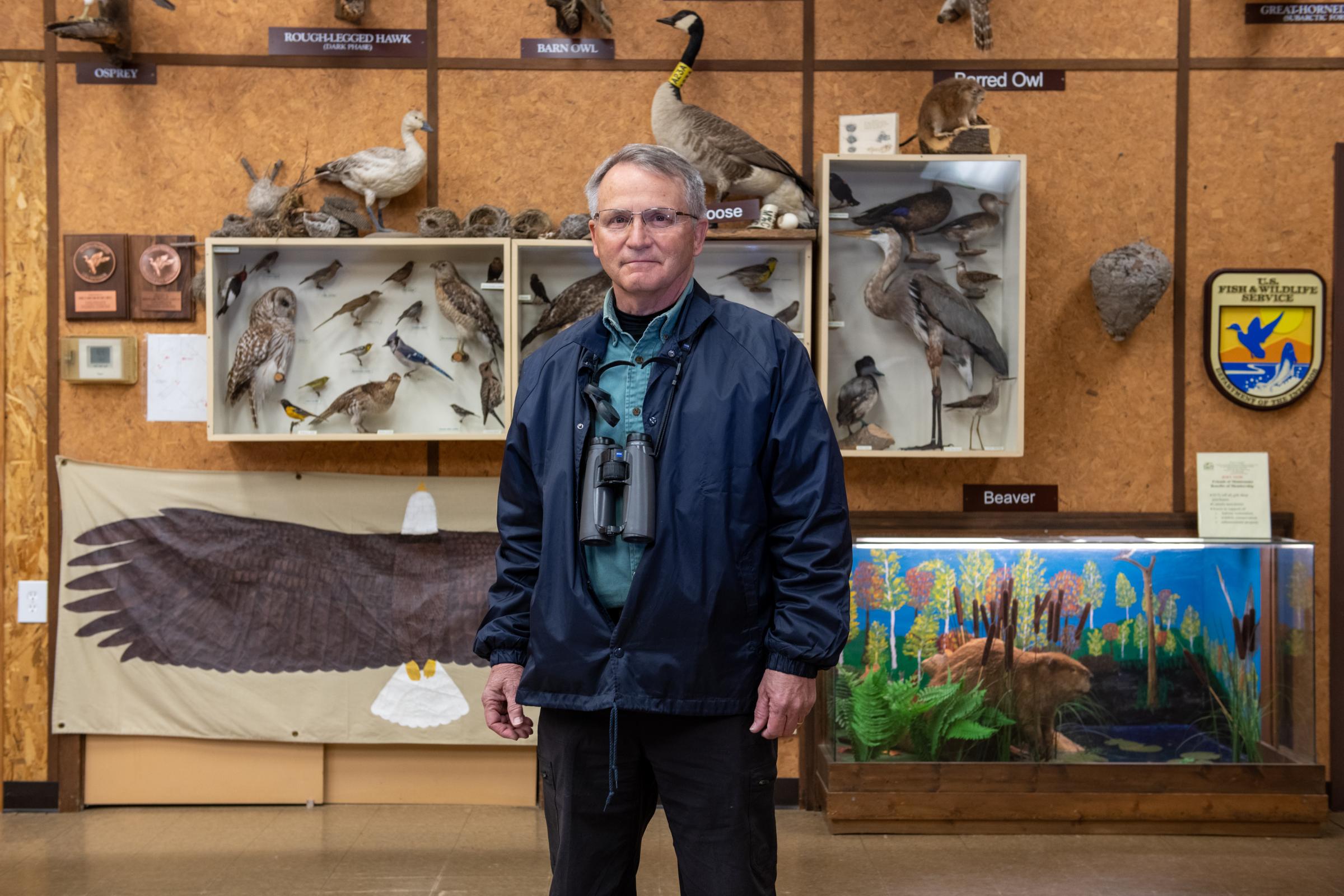 David Fitch, a long-time volunteer at the Montezuma National Wildlife Refuge, stands before donated specimens — some over 50 years old — meant to show visitors what birds can be spotted on the refuge. Fitch volunteers to answer the questions of anyone who comes by the visitor center. 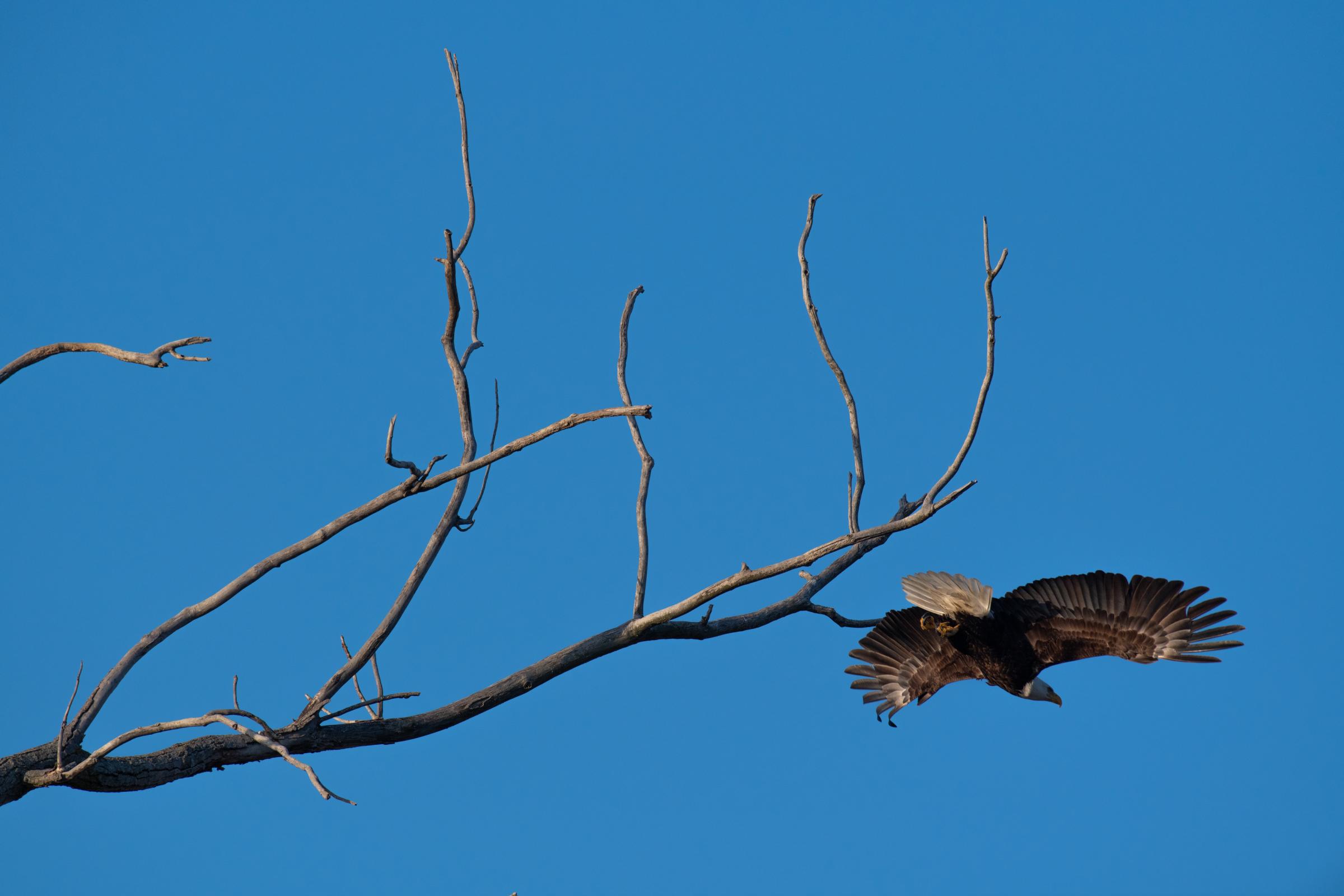 A bald eagle launches itself from its perch to grab a fish out of the Seneca River. The raptor diligently flew its catch to its two hungry chicks before returning to the tree to look for more prey. 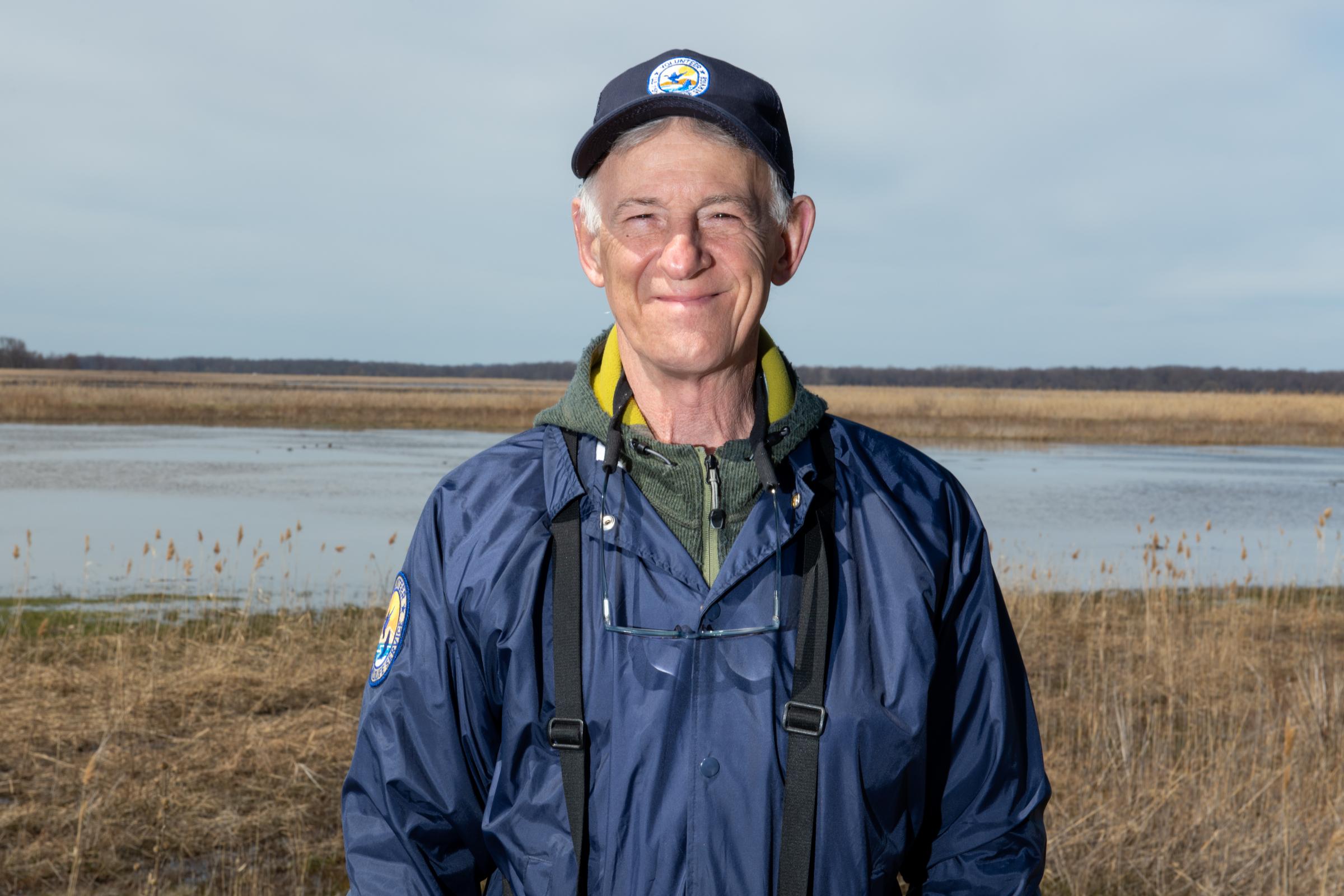 Peter Saracino volunteers to work as a roving naturalist during the spring and fall migration when the population of birds is highest within the refuge and the birds are most active. Saracino brings a large sandwich board inviting visitors to stop along the Wildlife Drive to view birds through a spotting scope and ask questions about the refuge. 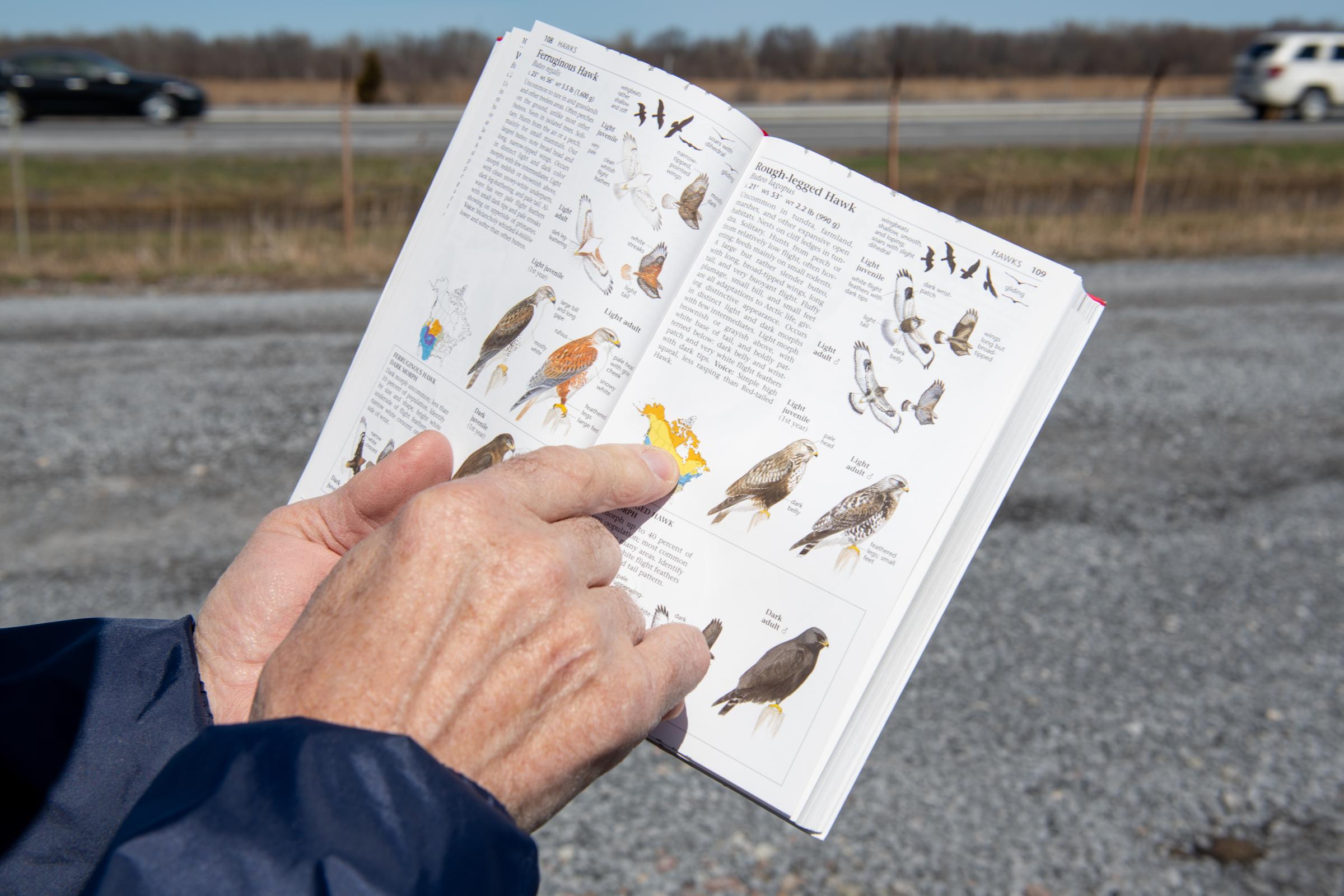 Saracino uses a field guide for birds to show visitors that they are watching a rough-legged hawk dive and soar over an open field.
A MISSION TO RESTORE AND MAINTAIN WILD HABITATS AND BIRD SPECIES

The Montezuma National Wildlife Refuge was established in 1938 with the intention of preserving optimal habitat for local waterfowl as well as providing an area for migratory birds to rest and feed along their journey, which can span thousands of miles. The refuge is located in the middle of the Atlantic Flyway, a corridor stretching along the East Coast of the United States and Canada to the Arctic Circle, which is one of the most active flight lanes in North America for migratory birds.

The refuge is comprised of 9,809 acres of marsh, grassland, and forest. This mixture provides a habitat for migratory birds, waterfowl, shorebirds, and raptors in addition to other wildlife. In the fall, the marshes of the refuge are flooded by water from the Seneca River in preparation for birds traveling through the area during the fall migration. The pools are slowly drained throughout spring after the majority of the birds have passed through the refuge. During the summer months, the soil is exposed to sunlight allowing plants to grow and create a nutrient-rich field. The soil is turned up by biologists before the marsh is flooded again in the fall, filling the water with vegetation, seeds, and insects which provides an ample amount of food for the arriving birds.

Biologists and volunteers at the refuge conduct surveys of the birds every Tuesday and Thursday. These surveys inform the staff what bird species inhabit the refuge, where on the refuge the birds congregate, and allow the staff to monitor the health of bird populations and the habitat on the refuge. This information advises actions taken by the staff and shapes future management plans. 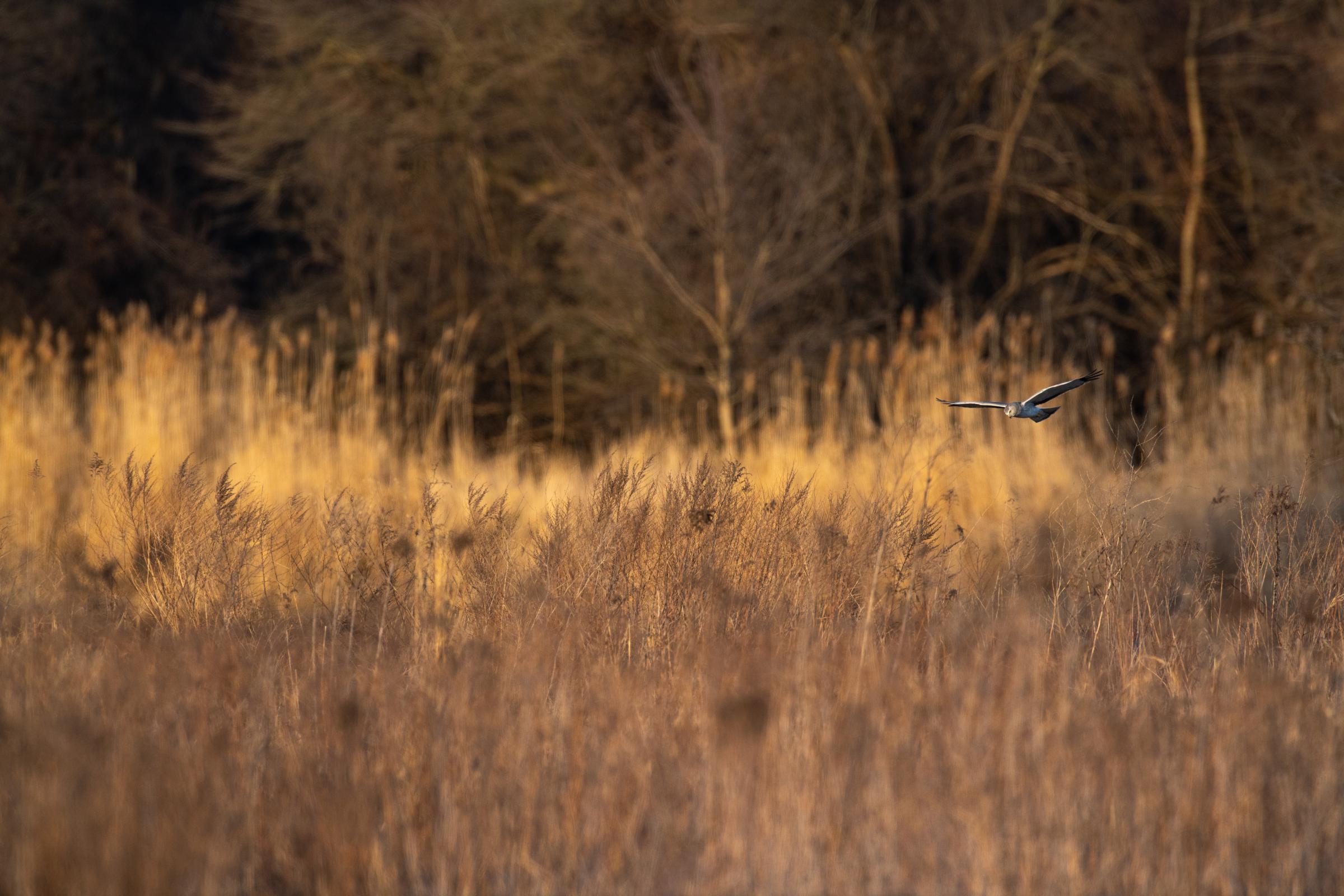 A male northern harrier glides over a grassland on the refuge as it searches for its next meal. These birds fly low to the ground and rely on their owl-like head that is shaped like a dish which funnels sound to its ears. This allows the bird to pinpoint small mammals, reptiles and birds hidden from view in the thick grass and underbrush. 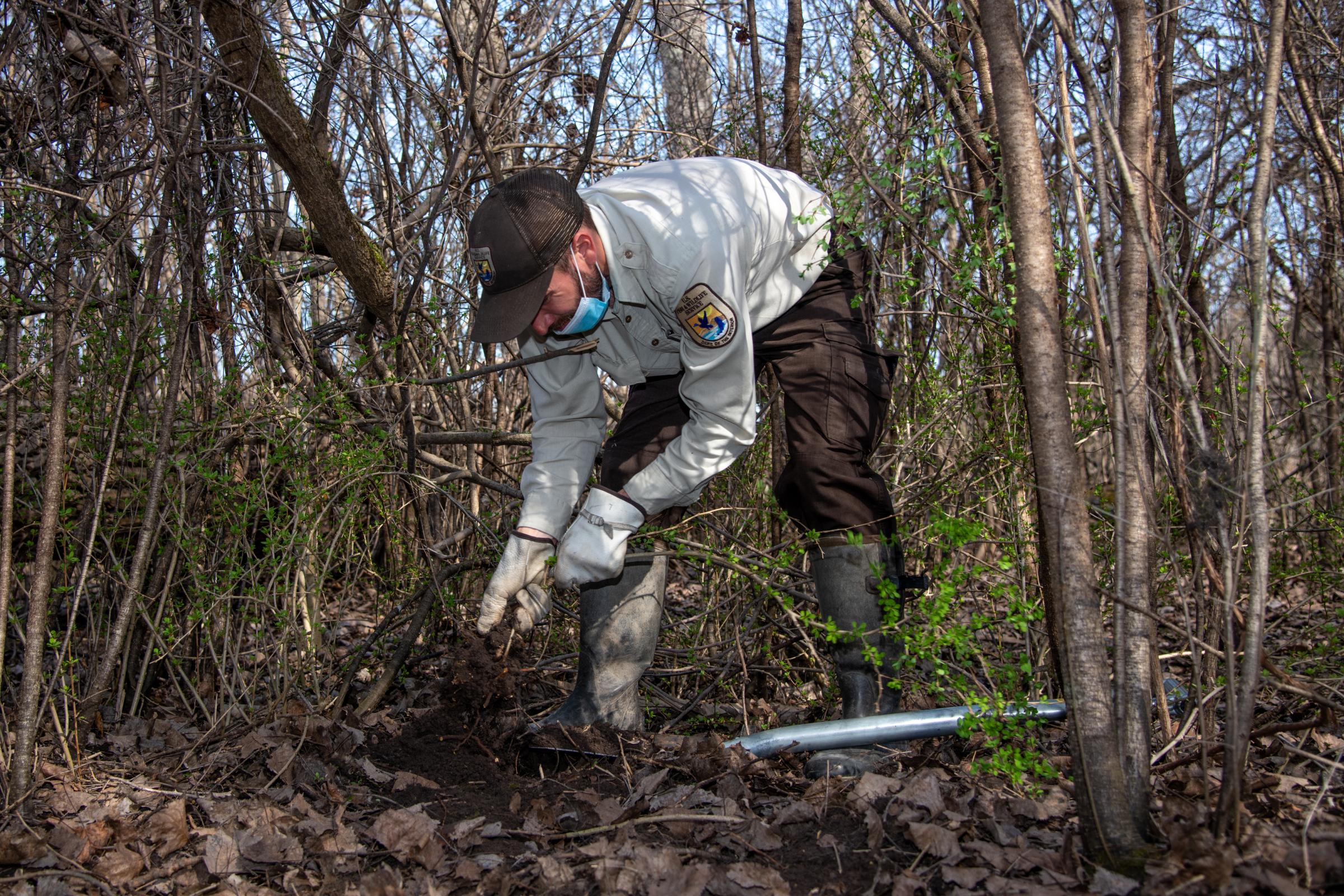 Nicholas Vermeulen, a biological science technician for the U.S. Fish and Wildlife Service, digs up a large Japanese barberry plant that had gone unnoticed in previous surveys of the area. The removal process of this invasive species is long and arduous — the berries can survive in the ground for up to nine years before sprouting, forcing the workers and volunteers to survey and remove plants annually. 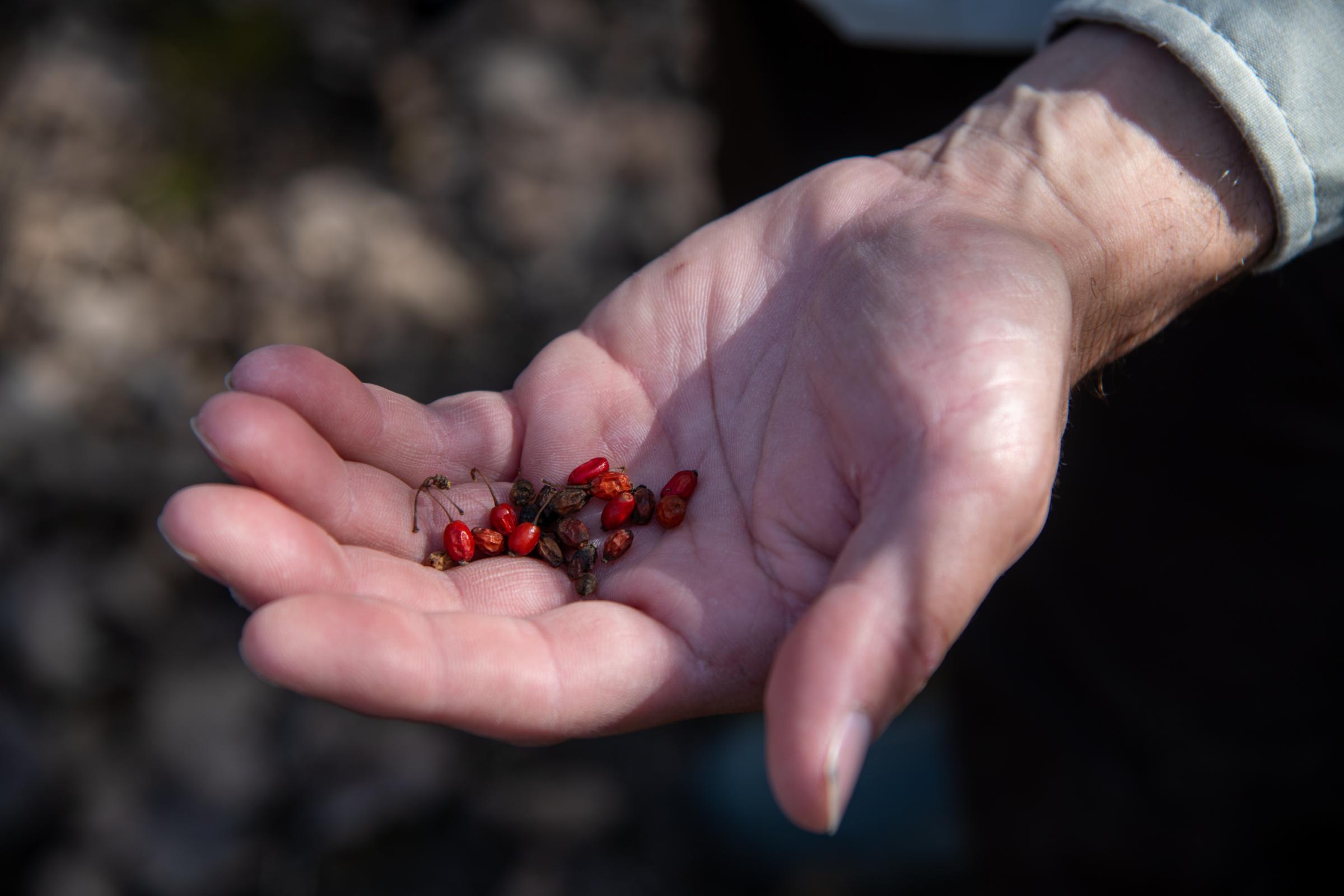 Vermeulen holds berries he picked from a Japanese barberry plant found on the refuge. The barberry plant is one of many invasive species that workers and volunteers routinely survey and manually remove from the refuge in an effort to make room for native plants to take root.

The Montezuma Alliance for the Restoration of Species & Habitats, otherwise known as MARSH!, is a program established in 2009 in support of habitat restoration efforts put forth by the U.S. Fish and Wildlife Service. Volunteers join refuge workers to control invasive species that have spread throughout the refuge by surveying and removing invasive plants as well as planting and monitoring the growth of native species.

Every spring, the MARSH! volunteer program meets twice a week for seven weeks to remove invasive species while the soil is still damp. Come summer, it becomes nearly impossible to pull entire root systems when removing the invasive species. If roots remain intact, the plant may regenerate in the following years rendering the effort futile. Invasive species also typically sprout leaves and flowers before native species, making them easy to identify early in the year.

One of the over 20 invasive species monitored on the Montezuma National Wildlife Refuge is the Japanese barberry. This plant, like many invasive species, was intentionally planted by people throughout the country as an ornamental; the plant’s red berries served as decoration in the front of houses. What many saw as merely a pretty shrub turned into a massive problem for much of the country. Over time, the barberry changes the pH levels of the soil it grows in to promote the growth of more barberry while decreasing the ability of native plants to survive. This alters the entire ecosystem. Established barberry plants create dense underbrush with snaking, interconnected root systems which further prevents the growth of native plant species and decreases the overall biodiversity. The dense thickets of barberry also create the ideal habitat for tick populations to flourish, posing a potential public health risk for people in the area.

The removal of invasive species is a long and arduous process — the berries of the Japanese barberry can survive in the ground for up to nine years before sprouting, for example. When Nicholas Vermeulen, a biological science technician for the U.S. Fish and Wildlife Service who is a seasonal worker at Montezuma National Wildlife Refuge, encountered a barberry plant that had been missed during the previous year’s surveying and had sprouted berries, he carefully plucked every one of the small red fruit he could find before sealing them away in his backpack to ensure more plants wouldn’t sprout up in the area.

Vermeulen has been fighting invasive species on the refuge for several years. He expects it will take another 5 years of work before the Japanese barberry is eliminated from the refuge. To accomplish this goal, MARSH! volunteers annually walk through the refuge and dig out every barberry plant they encounter. Dug-out plants are hung in the crook of tree branches with the roots pointing skyward. The sun dries the roots, rendering the plant unviable which ensures it will no longer produce berries and continue to spread through the refuge. Volunteers and workers perform a similar process with honeysuckle and multiflora rose, while other invasive species are countered with chemical treatments. 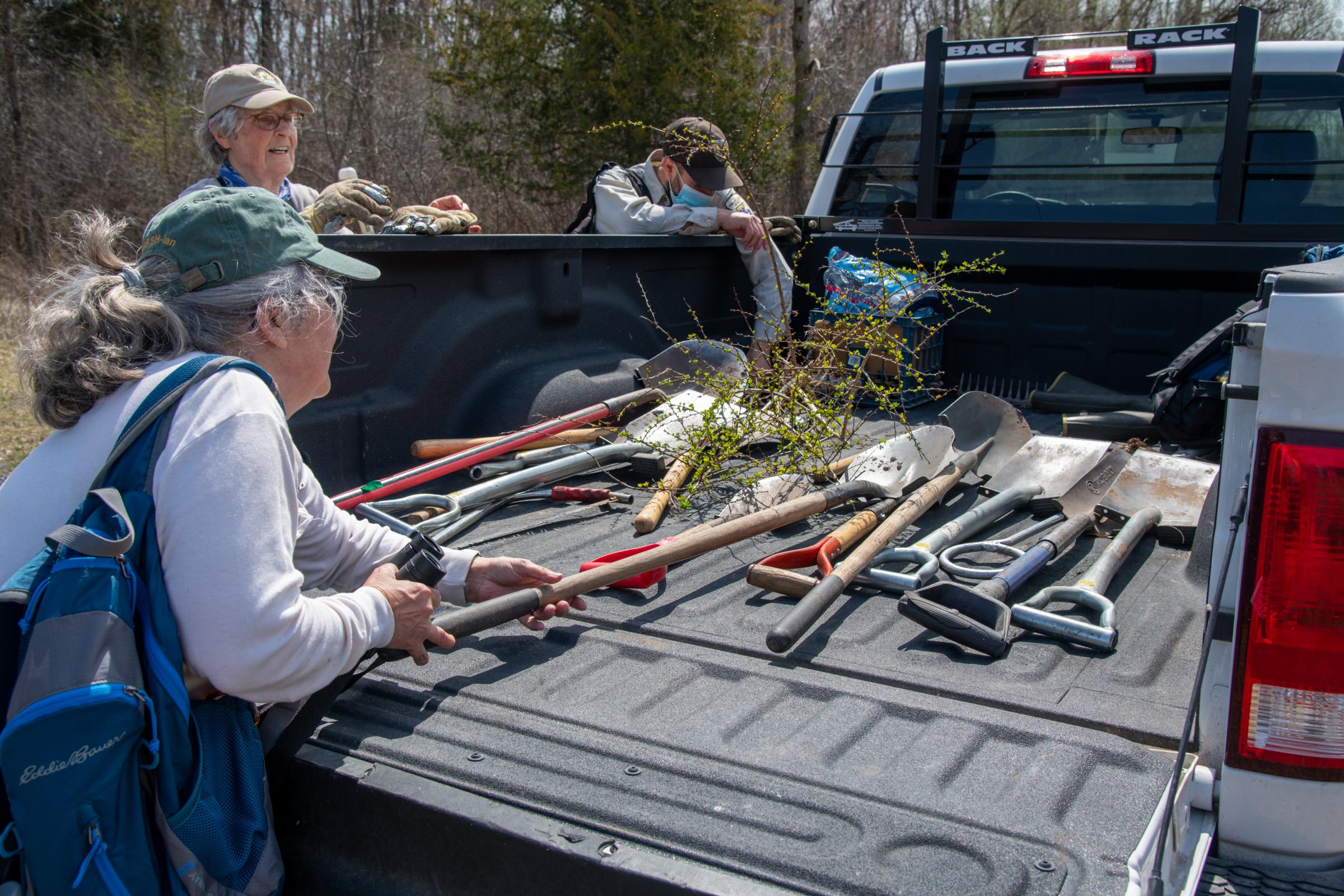 Every spring, the MARSH! volunteer program meets twice a week for seven weeks to remove invasive species while the soil is still damp. Come summer, it becomes almost impossible to remove whole root systems. If roots remain intact, the plant may regenerate in following years rendering the effort futile. Invasive species also typically sprout leaves and flowers before native species, making them easy to identify early in the year. 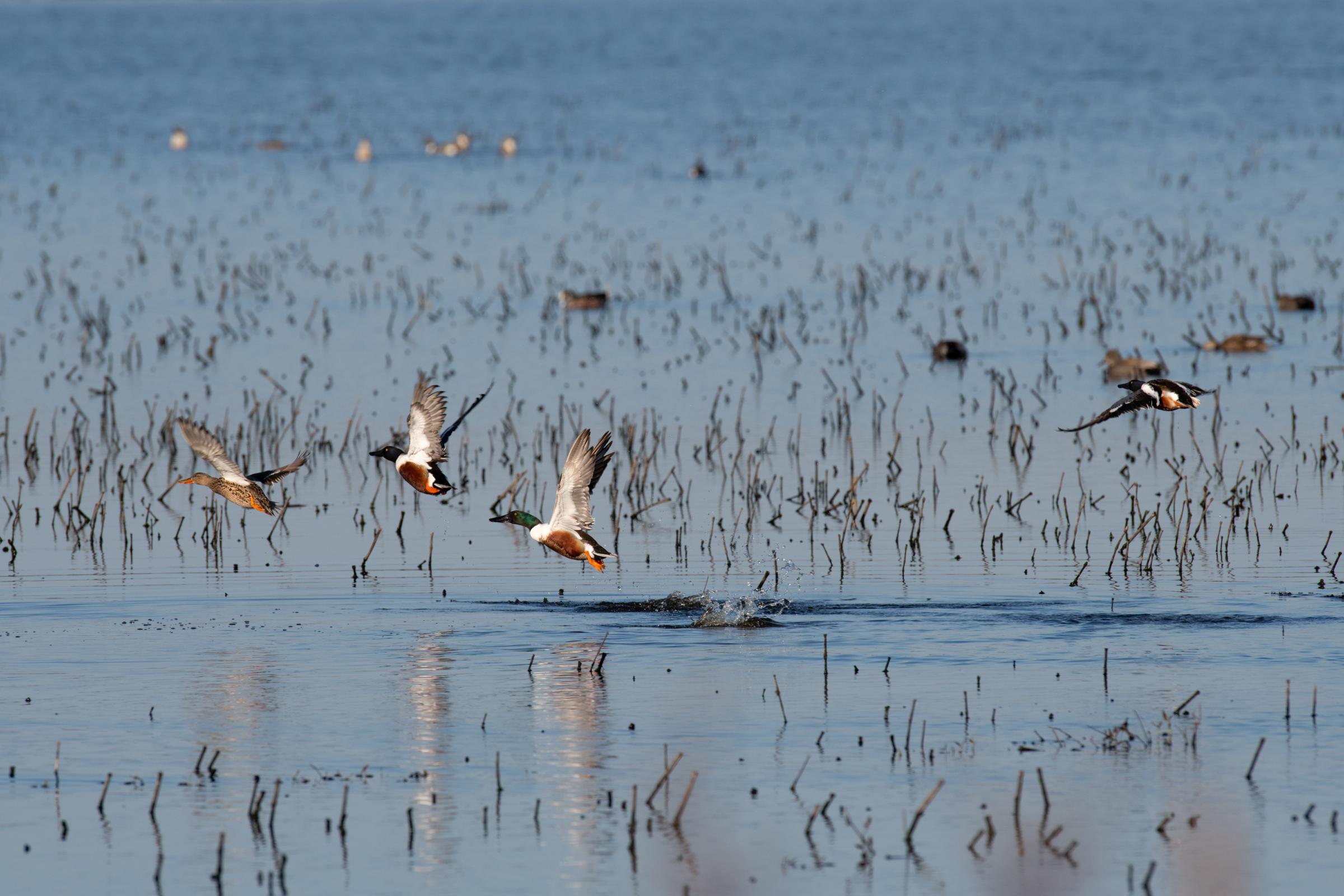 Northern shovelers flee after spotting an Osprey flying above them. These birds are one of many species that use the refuge as a pit stop during their spring and fall migrations.
BALANCING THE NEEDS OF WILDLIFE AND HUMAN INTEREST
The average visitor has no problem spotting a bald eagle while at the refuge. There are often long lines of cars pulled to the side of the Wildlife Drive as guests watch eagles dive to grab fish out of the Seneca River or chase osprey to try and steal their catch. Today, the refuge is home to six active eagle nests. This is only true because of decades of restoration efforts made by the refuge staff.

In 1960, there was only one known bald eagle nest in the entire state of New York. A combination of hunting, habitat loss and pesticide poisoning decimated the population. The Montezuma National Wildlife Refuge, in cooperation with the U.S. Fish and Wildlife Service and the New York State Department of Environmental Conservation, designed a program to release young bald eagles into the refuge. The 1976 initiative used a technique called hacking, which had proven successful in reintroducing peregrine falcons into the wild. Young bald eagles were taken from nests in states with stable populations including Minnesota and Wisconsin and transported to New York where they were placed in a man-made nest on an elevated platform to acclimate to their surroundings and learn to survive. The birds were looked after by the workers at the refuge who fed them, careful to prevent the birds from associating people with the procurement of food until the birds were able to fly and hunt for themselves. The program concluded in 1989 after ten nesting pairs were established within the state. The population of bald eagles in the state of New York and throughout the entire United States has grown exponentially since then.

The Montezuma National Wildlife Refuge has to strike a balance between the needs of the wildlife that use the land for survival and the needs of the people who wish to use the land for recreation. The Wildlife Drive is closed to the public throughout March during the peak of the spring migration to allow birds to travel without being disturbed by large groups of people despite complaints from birdwatching enthusiasts. To make up for the lack of access during the beginning of the year, the staff at the refuge allow not only vehicles but pedestrians to traverse the length of the Wildlife Drive throughout the summer months.

The Wildlife Drive and several trails cut through the wildlife’s habitat to ensure recreational opportunities for visitors. With proper permits, the refuge allows the hunting of waterfowl, Canada goose, snow goose, white-tailed deer, turkey, and the trapping of small game during the New York state hunting season. Despite the refuge having been established nearly 20 years prior to the construction of the New York State Thruway, the project was allowed to divide the wetland. A gate marks where the original Wildlife Drive once was until the Thruway forced a new, shorter Wildlife Drive to be built paralleling the new road. Concessions must be made by both forces for the refuge to continue to thrive. 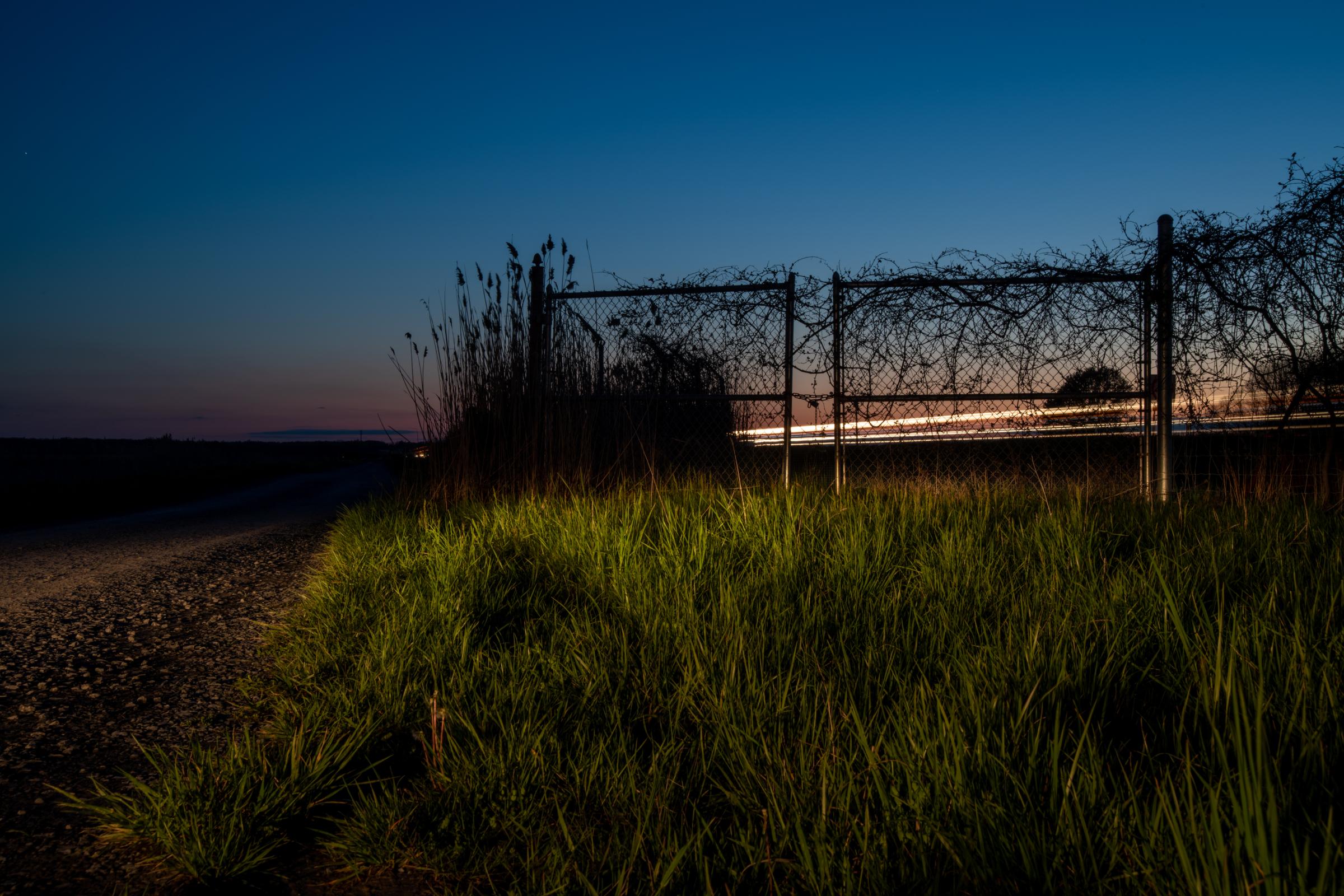